Rethink Institute Update: Persecution of the Gülen Movement in Turkey 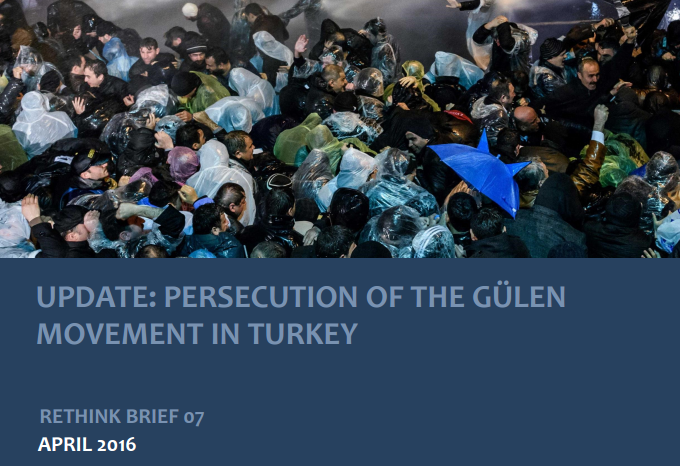 The Gülen (a.k.a Hizmet) movement, a faith-based community, has been subject to political persecution for more than two years by the Turkish government since they stood up against corruption and injustice under the rule of President Recep Tayyip Erdogan. Erdogan has publicly called for a “witch hunt,” and arrests, threats, and harassments have now become a routine for participants and sympathizers of the movement. According to security officials, as of April 2016, as many as 2,261 individuals have been detained, 501 of them have been sent to jail, and 623 have been released on probation. The detainees are people from all walks of life including businessmen, doctors, teachers, academics, police officers, philanthropists and even housewives.
Antiterror laws are used to detain the Gülen movement individuals and seize their assets. Because the Turkish government describes the Gülen movement as a terrorist organization, any type of donation to Gülen movement nonprofits and charity groups are considered as financing a terror group.  Many are banned from leaving the country. There are also reports that public authorities seize the passports of movement affiliates who return from abroad.
Most movement-affiliated media has been subject to a “violent and illegal takeover”  including highly circulated Zaman and Bugun newspapers and several TV stations, resulting thousands to be fired. It is widely expected that next in line for government takeover are the schools and universities affiliated with the movement.
READ FULL BRIEF (PDF)