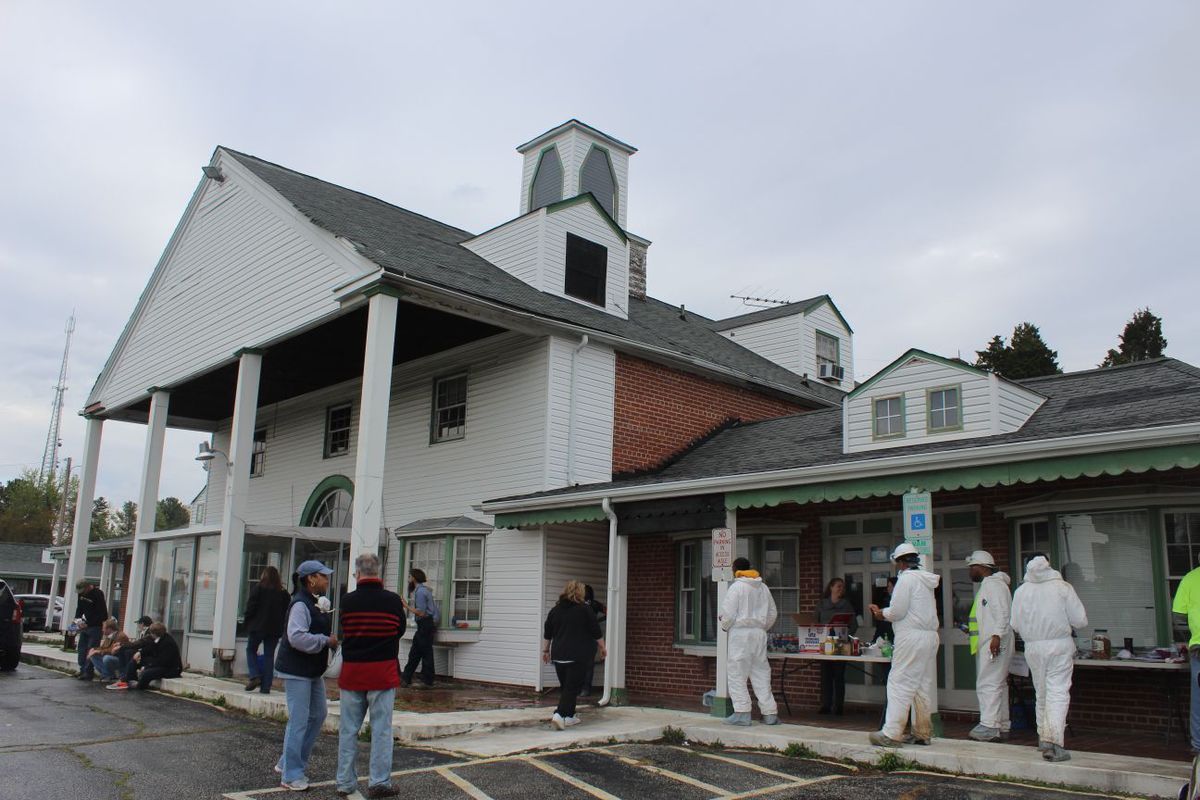 More than 50 Charles County residents from churches, mosques and other religious organizations, volunteered their time and efforts Saturday to be a part of the Southern Crossing Project at the Shine Inn Motel in Newburg.

“Who would have thought you’d see the Amish, Christians, Muslims and Quakers gather for a big community project like this one?” asked LifeStyles, Inc. Executive Director Sandy Washington.

“We are creating 47 units, with a playground and basketball court for the younger children and gardens. This is phase 1, the demo phase, and we are hoping to have it finished and up and running by July,” Evans said.

The volunteer effort has averaged 50 to 60 volunteers a week since October, with the help of Josh Barrett, Southern Crossing Project community advocate, who has been successful in getting others in the community involved by using social and digital media to convey the necessity of this cause to others.

“This hotel opened back in 1952 and it was a Charles County landmark, so instead of tearing it down we decided to keep the area as a landmark and help others have better lives. There are people who sit in lobbies and emergency rooms purposely because they have no where else to go when its too cold or too hot. This gives the less fortunate a second chance and we have 100 people who are already waiting to move in,” Barrett said.

Washington said LifeStyles has been serving a population that has “just been hanging on” for more than 19 years and the Southern Crossing Project, a “God-led” project, is the progression and the next step in helping people in the community.

“This project is so inspirational. We work every Saturday, rain or shine, because there are people that are working two or more jobs who still can’t find a place to live, children living in cars and families living in tents. We have volunteers come here every Saturday to show how much they care. This foundation that is being laid here is where hope is realized and that’s what Southern Crossing Project is,” Washington said.

Evans quit her job to take on the project full-time because of her faith in how she and others can help the local working poor in the community.

“In the Charles County community, the rents range from $1,200 to $1,800 a month and that causes problems for those who are only making enough to pay their rent. All of the families that move in to these units will be working and paying 30 percent of their income to live here and the rest will be covered through sponsorships,” Evans said.

The families will live at the site for one year, as LifeStyles and other volunteers work to help the families get back on their feet by providing and teaching them workforce skills, nutritional skills, budgeting skills and having a case manager assist them.

Each faith-based organization participated in building, providing sponsorship or donating food. Other volunteers will help with providing support services after the project is finished being built in the summer.

“I wanted to work with the local Mosque and Quaker group on a project and we came across the Southern Crossing Project,” said Bill Hoxie, a Quaker from Patuxent Friends Meeting. “We all have jobs where we work with diverse folks and I feel that it’s important for us to work together on things that are just for the common good of all of us. Its more productive for people to vent their frustrations about issues in the community by actually doing something about it.”

“It is very important to take care of those who are less fortunate and charity is one of the main obligations of a Muslim,” Umer said. “We value the efforts from LifeStyles and we know Christians and Muslims both have the same values in reference to helping their neighbors. This project provided an opportunity to work together with other communities towards one common goal and that is to help others humans. This project is big, I pray to God for the success of this project.”

The immense project requires a continuous need for volunteers in order to get the job done. Washington said the Southern Crossing Project is also one of the biggest projects that Charles County has seen yet, with the land being a span of 264,845 square feet and 5.027 acres.

“Thousands of people will drive up and down [U.S.] 301 to see this testimony and say ‘look at what God can do,’” Washington said.