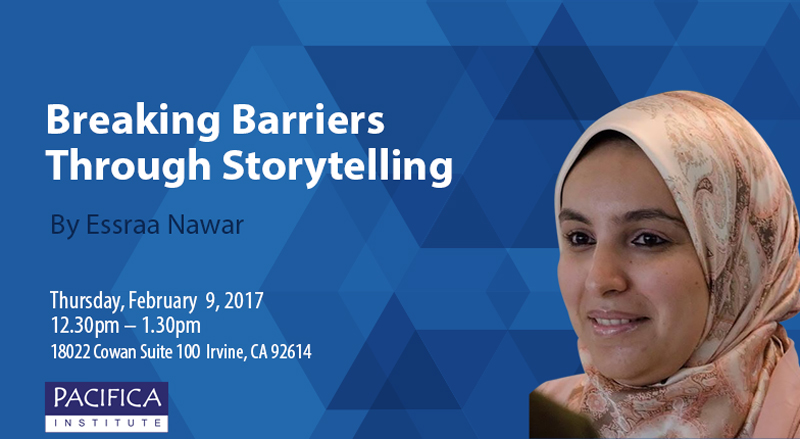 Essraa Nawar has been the Coordinator of Library Development and Marketing and the Chair of the Arts, Exhibits and Events Committee at the Leathery Libraries at Chapman University, California, since 2009 where she recently co-curated an exhibit titled ” A Country called Syria”. Over the years she has studied, lived and worked in many places, including the Gulf area (Qatar), Washington D.C., where she worked for The Royal Embassy of Saudi Arabia, and Alexandria, Egypt where she worked for Bibliotheca Alexandrina. In 2009, she moved with her husband and family to Orange County, California in 2009.

Essraa is a regular contributor to the Huffington Post, the Orange County Register and several other magazines and blogs where she shares her story as a Muslim Women living in American and is also trying to bridge cultural misunderstandings between Arabs, Muslims and Americans through her artwork. Essraa was also recently appointed to join as a Women Leader in the Internet Marketing Association. She is very passionate about and active in the topics of diversity, cultural and religious intelligence, interfaith dialogue and empowering Muslim Women. She thrives best in diverse environments and believes in the power of humanity. She thinks that we all have the power to change the world one person at a time. She recently took her diversity message to the international stage where she spoke at a TED conference at the Technical University of Munich on how to feel welcomed and empowered in a diverse world. Her talk (only live for a few weeks) has been viewed and shared more than 4000 times and have since been sharing her message through public speaking, radio interviews and podcasts.

“We often let stereotypes influence our perspective and no one more that the Muslim American community has suffered from that. It’s the moment we break these walls and embrace each other, sharing stories, words, culture, food, happiness, sadness is what makes us human beings and when misconceptions are erased and barriers are broken. Nawar believes in the magical power of storytelling and thinks that the time has come for the Muslim American community to focus not on just fighting these stereotypes and teaching people about Islam and Muslims but by also sharing their personal stories (daily life, careers, families and more)  through different venues (writing, social media, blogging ..etc) which in most cases automatically transfers into changing the current narrative. Through sharing her story in different ways, Essraa has seen a tremendously positive outcome and unleashes the power of being different yet at the same time connected to the rest of the world without losing her identity.”