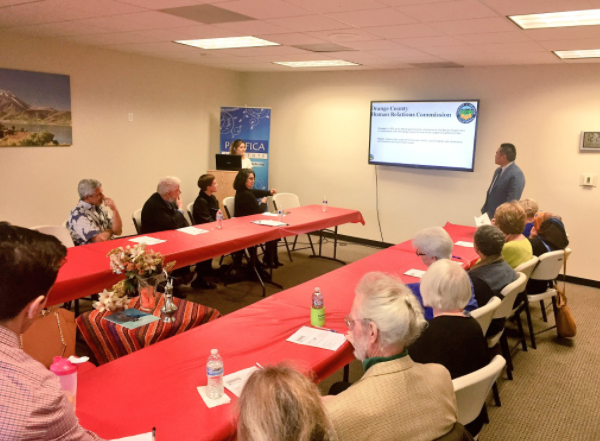 Mr. Han began his presentation with the definition of HATE. Hate is an intense animosity or dislikes, intense hostility and aversion usually deriving from fear, anger, or sense of injury, also a feeling of dislike so strong that it demands action. A hate crime is an act, define by California Law and National Law that commits person’s identity, gender, ethnicity, race, religious and sexual orientation. Mr. Han goes on and talks about verbal hate incidents, stating that hate is an action of a behavior that motivated by hate or biased but it is protected by our First Amendment. In United States, we have protected freedom of speech, freedom of press, freedom of expression. So, if someone comes up to you and calls you names or starts being racist, you are all protected by First Amendment. Furthermore, Mr. Han gave brief information about the hate groups in America. He stated that there are 917 hate groups in America. In California, there are 80 hate groups that are documented today. After the election, the hate crime rate increased. In Orange County, hate crime rate increased right after the November 8. It is now 17 hate crimes in Orange County. One heartbreaking hate incident recorded in Orange County is; a group of Elementary students came up to a janitor, who was a Latino, and started screaming “Build that Wall”.

Mr. Han continued his presentation by explaining the following question; How should we give a response if we experience a hate incident is our community? One of the most significant things we can all do if we witness racial or religious abuse in public is to report it to the police by calling 911. If you tell the police you think something is hate incident, they should record it as such. It doesn’t matter if the police officer dealing with the matter or perceives it differently. You don’t have to show evidence of prejudice or hostility to report a hate incident. However, when the police investigate the incident, they will have to find evidence of prejudice or hostility to charge the offender with a hate crime. Evidence are very important in an incident like crime, because you have to show something in front of the judge when the case goes to court. He concluded his presentation by stating that we should all fight against hate crime, don’t hesitate to call 911 when involved in a hate crime incident. We should not allow our communities face multiple forms of discrimination.