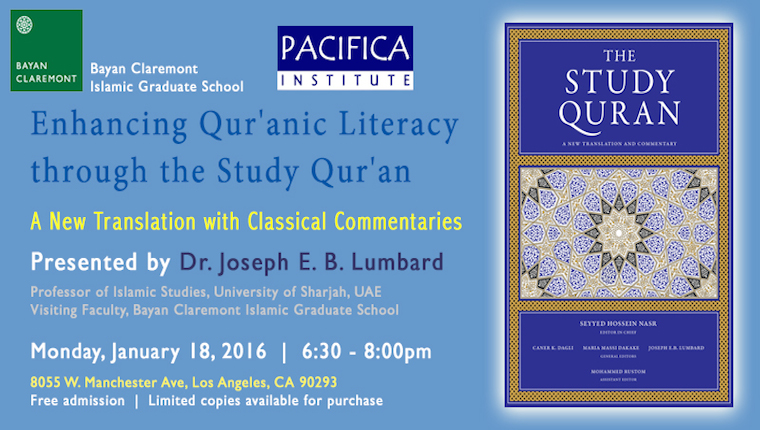 What does the Qur’an say about God’s qualities, war and peace, race and gender, and other topics? Over the centuries, Muslim scholars have offered their understandings of the divine scripture. Now, much of this commentary tradition has been documented in a monumental single work – The Study Qur’an.

The Study Qur’an is a new translation produced by a team of scholars led by world-renowned authority on Islamic thought Dr. Seyyed Hussein Nasr, including Dr. Joseph Lumbard. Nearly a decade in the making, the included commentary is based on over forty classical and modern sources, including some of Islam’s greatest Quranic interpreters, such as Tabari, Maturidi, Tusi, Qurtubi, Baydawi, Tabrisi, Sulami, Razi, Zamakhshari, Alusi, Maybudi, Kashani, Ibn ‘Ashur, and Tabataba’i. A series of essays from experts in Qur’anic studies are also part of this must-have resource for students of all backgrounds.

Bio:
Dr. Joseph Lumbard received his Ph.D. from Yale University and currently teaches in the Dept. of Arabic Studies and Translation at the University of Sharjah, UAE. He is an Associate Editor of “The Study Qur’an,” and editor of the book “Islam, Fundamentalism, and the Betrayal of Tradition.” He is a visiting faculty member of Bayan Claremont Islamic Graduate School.