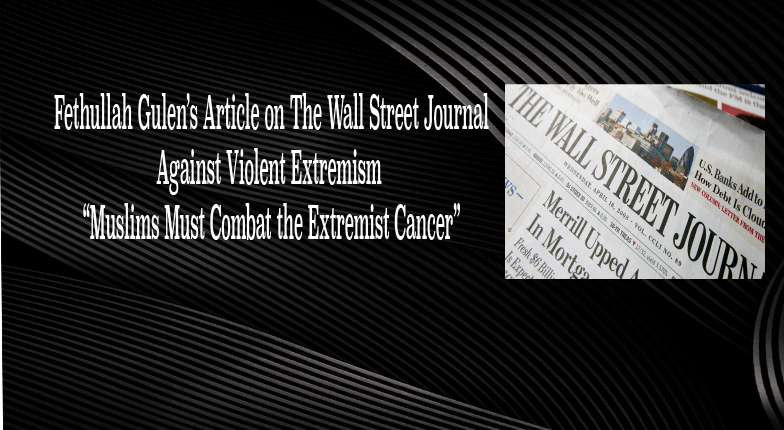 Muslims Must Combat the Extremist Cancer

As the group that calls itself Islamic State, known as ISIS, continues to produce carnage in the Middle East, Muslims must confront the totalitarian ideology that animates it and other terrorist groups. Every terrorist act carried out in the name of Islam profoundly affects all Muslims, alienating them from fellow citizens and deepening the misperceptions about their faith’s ethos.

It isn’t fair to blame Islam for the atrocities of violent radicals. But when terrorists claim the Muslim mantle, then they bear this identity, if only nominally. Thus members of the faith must do whatever possible to prevent this cancer from metastasizing in our communities. If we don’t, we’ll be partly responsible for the smeared image of our faith.

First, we must denounce violence and not fall prey to victimhood. Having suffered oppression is no excuse for causing it or for failing to condemn terrorism. That the terrorists are committing grave sins in the name of Islam is not merely my opinion; it is the inevitable conclusion of an honest reading of primary sources: the Quran and the accounts of the life of Prophet Muhammad. The core principles of these sources—relayed over the centuries by scholars who devoted themselves to studying the Prophet’s sayings and practices, and to the “author’s intent” in the Holy Book—dispels any claims terrorists make of religious justification.

Second, it is important to promote a holistic understanding of Islam, as the flexibility to accommodate the diverse backgrounds of its adherents can sometimes be abused. Islam’s core ethics, however, are not left to interpretation. One such principle is that taking the life of a single innocent is a crime against all humanity (Quran 5:32). Even in an act of defense in war, violence against any noncombatants, especially women, children and clergy, is specifically prohibited by the Prophet’s teachings.

We must demonstrate these values by showing solidarity with people who seek peace around the world. Given the nature of human psychology and the dynamics of the news, it’s obvious that mainstream voices are less likely to capture headlines than extremist ones. But instead of blaming the media, we should find innovative ways to ensure our voices are heard.

Third, Muslims must publicly promote human rights—dignity, life and liberty. These are the most basic of Islamic values and no individual, nor any political or religious leader, has the authority to snatch them away. Living the essence of our faith means respecting diversity—cultural, social, religious and political. God identifies learning from one another as the primary goal of diversity (Quran 49:13). Respecting each human being as a creation of God (17:70) is respecting God.

Fourth, Muslims must provide educational opportunities to every member of their communities, where the study of sciences, humanities and arts is embedded in a culture of respect for every living being. Governments in the Muslim world must design school curricula that nurture democratic values. Civil society has a role in promoting respect and acceptance. This is the reason participants of the Hizmet movement have set up more than 1,000 schools, tutoring centers and dialogue institutions in more than 150 countries.

Fifth, providing religious education to Muslims is critical to depriving extremists of a tool that they use to spread their twisted ideologies. When religious freedom is denied, as it has been for decades in parts of the Muslim world, faith grows in the shadows, leaving it to be interpreted by unqualified and radical figures.

Finally, it is imperative that Muslims support equal rights for women and men. Women should be given opportunity and be free from social pressures that deny their equality. Muslims have a great example in Prophet Muhammad’s wife Aisha, a highly educated scholar, teacher and prominent community leader of her time.

Terrorism is a multifaceted problem, so the solutions should address the political, economic, social and religious layers. Approaches that reduce the problem to religion do a disservice to at-risk youth and the world at large. The international community would do well to realize that Muslims are the primary victims of terrorism—both literally and symbolically—and they can help marginalize terrorists and prevent recruitment. That’s why governments should avoid statements and actions that result in the alienation of Muslims.

Violent extremism has no religion; there will always be people who manipulate faith texts. Just as Christians do not endorse Quran burnings or the actions of the Ku Klux Klan, and Buddhists do not endorse atrocities against Rohingya Muslims, mainstream Muslims do not endorse violence.  Muslims have historically added much to the flourishing of human civilization. Our greatest contributions were made in eras when the faith cherished mutual respect, freedom and justice. It may be immensely difficult to restore the blotted image of Islam, but Muslims can be beacons of peace and tranquility in their societies.

*Mr. Gulen is an Islamic scholar and founder of the Hizmet civil-society movement.