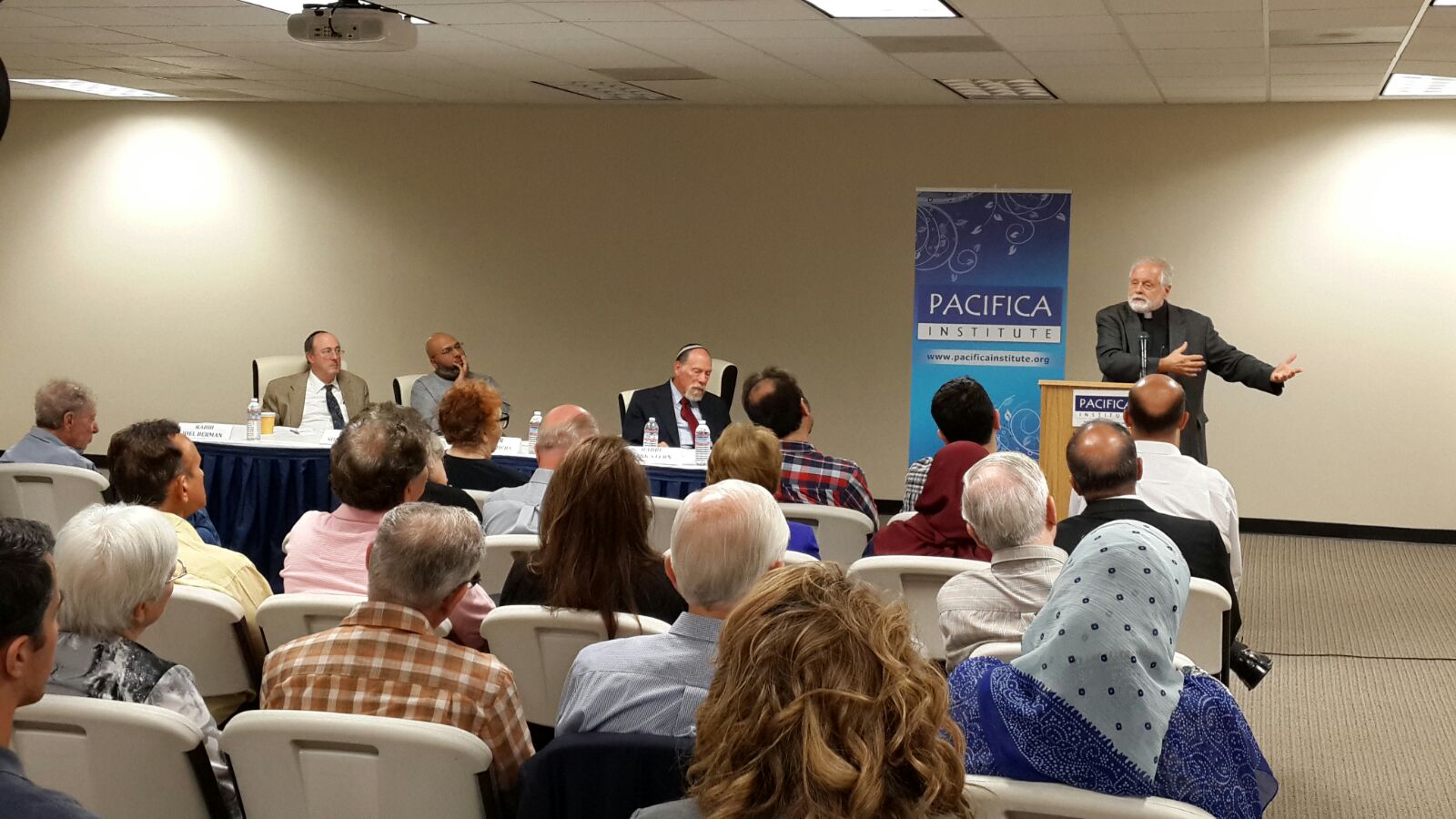 The event was mediated by Rabbi Frank Stern who is the author of A Rabbi Looks at Jesus’ Parables, and a Professor at Orange Coast Community College. Pacifica Institute invited three panelist to take part in the discussion: Father Thomas Welbers, Shaikh Suhail Mulla, and Rabbi Joel Berman. The evening started with a brief introduction by the Vice President of Pacifica Institute, Atilla Kahveci. Kahveci gave a background to Pacifica Institute and focused his attention on how dialogue was needed in multicultural communities across the globe.

Rabbi Stern then lead the event by taking the audience back to Abraham’s life in early mesopotamia. According to Stern, Abraham was an immigrant when he reached Israel and he was successful due to his ability to get along well with his neighbors. Using Abraham’s history,  Stern set the tone for the panel by stating, “I don’t want us to focus on the differences; we need to share what we have in common…respect, being able to honor a person different from you, so eventually we can trust and admire each other.”

Father Welbers expressed that the shared belief of Abraham as father symbolized a family bond between the major monotheistic religions. He stated that Catholic-Christians are open to all that is true and holy, and the only way to see truth is by opening dialogue. He also went on to say that the kinship of the Jewish people should be recognized because they were the first people of the covenant. The theme of the panel came at an appropriate time for Muslims who celebrated one of the most important holidays one week prior: Eid al-Adha (The festival of sacrifice), where Abraham showed his willingness to sacrifice his son for God.  Abraham’s characteristics are embodied in Muslim daily life as they accept surrendering to God’s will. According to Shaikh Mulla, Abraham as a young boy lived during a time where idol worship was the majority belief system and he challenged this idea. Abraham destroyed the statues of the idols in order to bring about dialogue in his community and make others aware of what they were doing.  Shaikh Mulla pointed out that Abraham’s legacy still lives on within the Muslim community because he was the builder of the Kabbah, which Muslims face to pray five times a day (one of the pillars of Islam).

Rabbi Berman elaborated on the similarities in Judaism and Islam by looking at Abraham’s history of anti-idolatry. He stated that Abraham destroyed the statues of idols made by his father’s own hands. The family business relied on making statues and the fact that Abraham was willing to go against this proved his knowledge at such a young age. Rabbi Berman went on to say that Abraham, as an immigrant, he purchased the first piece of Jewish estate in the holy land with the notion that he did not want any disputes about the land in the future. He concluded by stating, “our version of Abraham is that he serves as an example of how to live a life even when you’re not perfect…we live in this life and Abraham was an example of how to do that.” As the panelist highlighted Abraham in their own theological narrative, it became clear that the prophet was significant in every major religion. By finding one common thread, the dialogue helped bridge together three distinct religions. After the panelist spoke, the audience was invited for a question and answer session.

Pacifica Institute of Orange County would like to thank the events moderator, panelists, and attendees. We strive to bring together more events that can bridge together diverse communities.