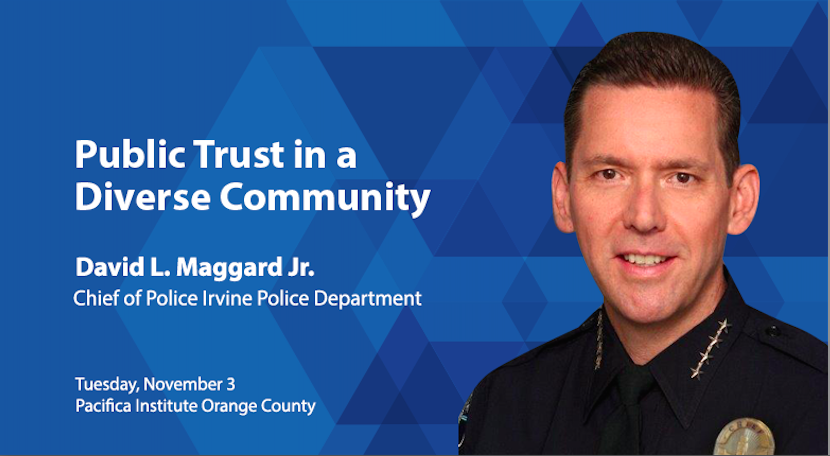 Chief David L. Maggard, Jr., was appointment to Chief of the Irvine Police Department (IPD) in 2003 and is responsible for implementing Irvine’s geographic policing strategy and has supported modernizing its patrol force and policing capabilities.

Chief Maggard began his law enforcement career with the University of California, Berkeley Police Department and has served as a police trainer, narcotics officer, community policing officer, crime prevention specialist, and bomb technician apprentice.  He is proud to serve with a highly-committed team of law enforcement professionals, who together have received national awards in technology and criminal investigations.

In 2009, Chief Maggard accepted the International Association of Chiefs of Police Excellence in Victim Services Award on behalf of IPD.  The Department also received the prestigious United States Department of Defense Freedom Award in 2010 in recognition of the support provided to its military reservists.

Chief Maggard and his team have implemented a number of innovative programs including formation of the Area Traffic Officer program, a Clergy Police Academy, recognizing that faith often assists in the coping and healing process, and the Return Home Registry program to reunite lost persons with physical or mental health needs with their loved ones.

Chief Maggard has received the Ambassador of Peace Award from the Violence Prevention Coalition of Orange County, the Joe Malloy Award from the California Police Chiefs Association, was recognized as the National DARE Executive Leader of the Year, and is a recipient of the College of Health and Human Services Alumni of the Year Award from California State University, Long Beach (CSULB). He has also received the Ethical Edge Leaders of Integrity award and the 100 Black Men of Orange County Gala Award for Distinguished Service.

Chief Maggard serves on the Irvine Public Schools Foundation’s Advisory Council, as Leader in Residence for the Ukleja Center for Ethical leadership at CSULB, and is a member of the Orange County Human Relations Commission.  He was appointed by Governor Brown as an inaugural member of the Board of State and Community Corrections and also serves as California’s representative to the State Associations of Chiefs of Police.  In 2011, he was the President of the California Police Chiefs Association, and continues to be an active member of the Board.  In 2007, Chief Maggard served as President of the Orange County Chiefs of Police and Sheriff’s Association.

Chief Maggard received a Bachelor of Arts degree in Legal Studies from the University of California, Berkeley.  While attending Berkeley, he earned All-American honors in Track and Field.  He received a Master of Science degree from CSULB and is a Doctoral candidate at Pepperdine University.  He is a graduate of the Federal Bureau of Investigation National Academy in Quantico, Virginia.