OC Panel: The Role of Prophet Abraham in Interfaith Dialogue 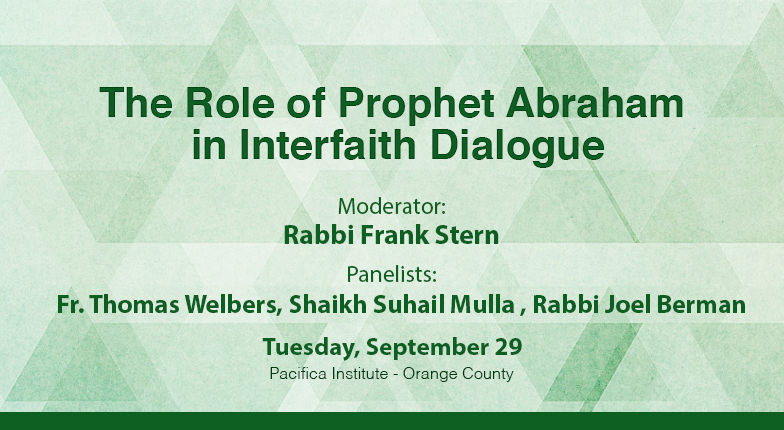 Ordained in 1965 at the Hebrew Union College in Cincinnati, Ohio, Rabbi Stern served for twenty years as Rabbi of Temple Beth Sholom in Santa Ana, California. As Executive Director of the Board of Rabbis of Greater Philadelphia, he headed an agency that provided chaplains to nursing homes, hospitals and prisons in Pennsylvania and New Jersey. Still actively involved in the Central Conference of American Rabbis, Rabbi Stern served as President of the Orange County Board of Rabbis and President of the Pacific Association of Reform Rabbis (seven western states). Until his retirement, Dr. Stern taught in the Department of Sociology and the Department of Comparative Religion at Cal State University Fullerton. He still teaches at Orange Coast College. Rabbi Stern is the author of the book A Rabbi Looks at Jesus’ Parables. He lectures extensively throughout California. Rabbi Stern is President of the Orange County Interfaith Network (OCIN) and the Founder of the Council of Religious Leaders of Orange County. Fr. Tom Welbers has been a Catholic priest for nearly fifty years, most of that time serving in parish and college campus ministry. He also has professional degrees in theology and liturgy, as well as institutional management, and continues avidly to explore pastoral theology, Scripture, liturgy, ecumenical and interfaith relations, and spiritual direction. He has a passion for sharing insight into our Christian heritage with others, through teaching, writing, and leading pilgrimages, especially to Early Christian World sites in Turkey. Now actively retired from parish ministry, he lives at Nazareth House in Los Angeles. www.tomwelbers.net.

Shaikh Suhail Mulla currently serves as the Interim Executive Director of Access California Services (accesscal.org) – California’s largest Muslim Social Service Agency. Previously, Shaikh Suhail served as an imam at the Islamic Society of Orange County and the Islamic Center of Glendale. Shaikh Suhail is a graduate of the world-renowned Al-Azhar University in Cairo, Egypt where he received his Bachelor’s degree in Shari’ah (Islamic Law). He also completed a two-year Islamic Studies program at Al-Asheera Al-Muhammadiya, an Al-Azhar affiliated institute in Cairo, Egypt, where he studied under renowned Azhari scholars. Shaikh Suhail has been an active member of the Southern California Muslim community for many years. He has lectured at educational and religious institutions, conducted numerous classes and served as a mentor and online counselor for Muslim youth. Shaikh Suhail lives in Orange County with his wife, Lobna, and their four children. Rabbi Berman was born in Wilmington, Delaware.  He majored in Dramatic Arts at the University of Delaware.
From graduate school and repertory theater in California, he ventured into the world of stand-up comedy, eventually working on the same stage as Robin Williams, Jerry Seinfeld, and Richard Lewis in San Francisco and Los Angeles. After realizing that a road comic’s life can be lonely and empty, he began to explore Buddhism and other faith systems. The more he looked, the more he realized that Judaism was where he should be. He entered the JTS rabbinical program at the University of Judaism in Los Angeles, achieving a Master of Hebrew Letters. Following a winding path which led to Israel, he finished his rabbinical training and was ordained in Jerusalem in November 2000.
From eight years, he served as the rabbi of Congregation Ohev Tzedek-Sha’arei Torah in Youngstown, Ohio, before returning westward to Anaheim and Temple Beth Emet. Rabbi Berman is married to Chaia Beckerman, an editor, and they have two children, Deana and Eitan.