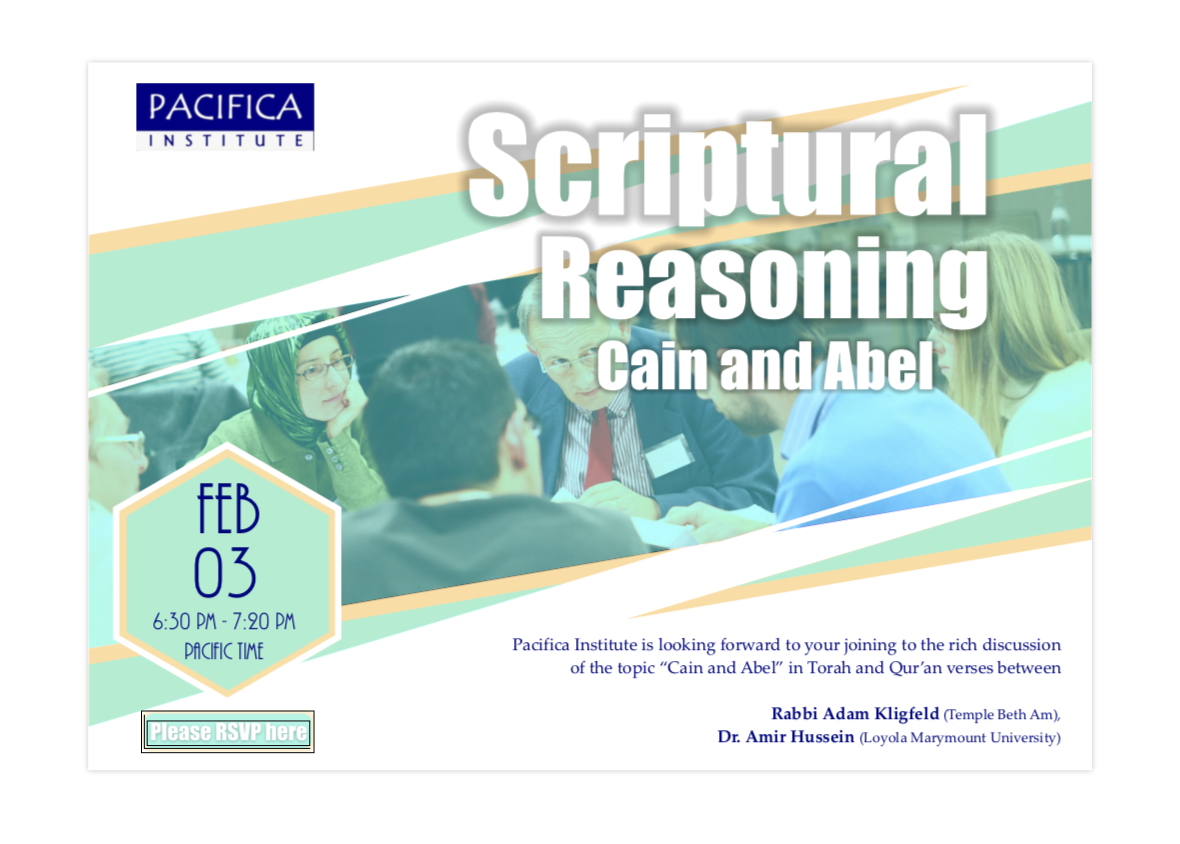 A valuable discussion between Rabbi Adam Kligfeld and Dr Amir Hussein about Cain and Abel in the respective Holy Scriptures, Torah and Quran

Pacifica Institute Scriptural Reasoning continued with the verses about “Cain and Abel” in the Holy Scriptures of Torah and Quran. Dr Amir Hussein from Loyola Marymount University and Rabbi Adam Kligfeld from Temple Beth Am joined to discuss the verses Quran and Torah with the guests.

Dr Amir Hussein read the ground rules of Scriptural Reasoning which is “reading, listening to and reflecting on scripture is something many do naturally within their own worshipping communities. Participants in Scriprural reasoning are not asked to leave that behind; rather, people of different faiths come together to read and reflect on their scriptures side-by-side.”

Dr Hussein continued intro by saying “Scriptual reasoning is not about seeking agreement but rather exploring the texts and their possible interpretations across faith boundaries, and learning to ‘disagree better’. The result is often a deeper understanding of others’ and one’s own scriptures, as well as the development of strong bonds across faith communities.”

Rabbi Adam Kligfeld discussed the origins of the names of Cain and Abel. “What happened between these two very first folks, two brothers. Cain said to his brother Abel however we don’t know exactly what they said to each other. Rabbinic literature tries to understand what is said to whom by whom that led to bloodshed. Murder can’t be undone. When someone loses his her composure and temper, at this point, Cain wanted to spill blood.”

Rabbi Kligfeld reminded the audience of  a super commentary from Rashi and Rabbi Mitzrahi from Constantinople from the 15th century, “One claimed the land the other claimed the moving objects. You standing on my land, the other said you are wearing my cloth. Some suggest it is to claim a wife. This is what happens when two good people, two brothers start seeing each other as not brothers but something else that ultimately lead to bloodshed and violence.”

Dr Hussein went by saying that, Muslims consider Quran not as the first scripture, but last in line of many scriptures. Dr Hussein mentioned Jack Miles the author of “God in the Quran” and the story of Cain and Abel verses in the Quran in Chapter 5. “In the Quranic version, sons are never named in the text. Those names don’t appear in Quran. Each of them offered sacrifices, one is accepted the other was not. Names are not important but the subject is. The purpose is. One says, I will kill you and the other says I won’t raise my hand to do harm.”

Dr Hussein went on saying that “It is not important what Cain and Abel gave for sacrifice. If you raise your hand to kill me, I won’t raise my hand even in self defense. Why? Because I am fearful of God. Because you take on the sin of the murdered person because there is no time left for atonement. The corpse need to be treated with respect, covering the dead. God sent a raven to show how the dead should be treated. Understand that you did something wrong. Dr Hussein mentions that he loves the connections between the Holy Scriptures.”

Rabbi Kligfeld reminded the listeners that we, as human beings should acknowledge ourselves as either Cain and Abel. Morality line is coming from Abel. Dr Hussein added that reading Torah and Gospel’s and Quranic version of the story was the purpose of connecting dots and filling in the blanks. “Quran does not mention the names, the point of the story is what is important. As a Canadian, my great rabbi is Rabbi Leonard Cohen, what is the story from Isaac’s point of view and what is like for Abraham or Abel.”

Finally, Dr Hussein opened the session for Q&A and for additional commentary from the audience. There were a couple of questions whether murder, shedding blood was known to be a serious crime by two brothers where Rabbi Kligfeld confirmed that the murderer knew too well that it was a serious crime.

Rabbi Kligfeld finished by saying that these kinds of gatherings won’t solve the world’s problems but the absence of these meetings will make it more difficult to do so.