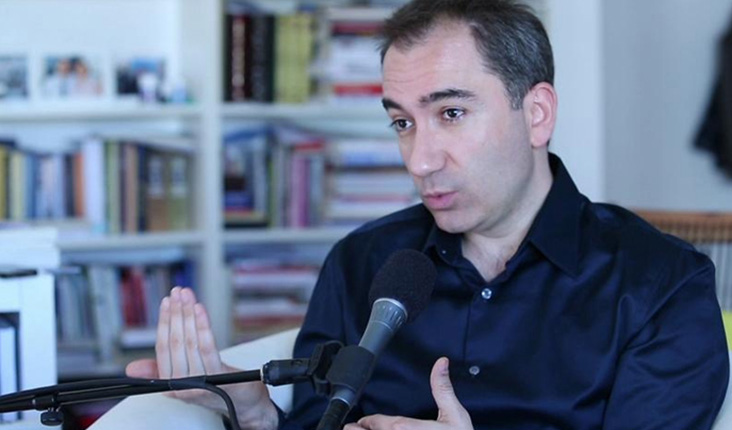 Mustafa Akyol started his speech by giving general information about the Middle East, colonialized North African countries, and the countries that have dominant Muslim populations.

In the very beginning, he talked about the previous century for these counties and said in his speech, “… until the World War II most of the world was colonialized, especially almost whole Africa. This colonialized world began to collapse. Now they became independent but there is something else that is not good for society. Dictatorship!”

He illustrated, “For example, FLN saved Algeria from French colonialism from the bloodiest war between them. Another example is of Saddam Husain in Iraq. But then they established its one party rule dictatorship. Interestingly most of these dictatorships were nationalistic and secular, not Islamic. Most of them actually suppress the Islamic movements and Islamic parties. For example, Nassir and Sadat suppress the biggest Islamic party, which are Muslim brothers in Egypt. These suppressions became gradually more angry and radical. This is the beginning of Islamic Fundamentalism. “

He also gave an example about the Iranian revolution and mentioned the independence democracy and secularism relations with these words: “Shah was forcing the women to take their hijab off. However, Khomeini was giving penalty to Shah and making a rule to not walk without taking one’s hijab off. None of these allowed letting the people choose. Let’s give them freedom, it is their individual choice. So what was really lacking in the Middle East? It was democracy. There was independence but no democracy. There was only one ruler, one party. Despite the fact that being secular does not guarantee democracy.”

According to Mustafa Akyol, Turkey was very lucky to have escaped from colonized countries’ problem, because Turkey has had democracy (20 years after the one party one rule system) since 1950 with free and fair election. He stressed the idea that freedom to vote and make a difference is very important. If one’s vote doesn’t matter, or if one doesn’t like the government, what can one do? You become hopeless, or maybe you decide to fight the regime, which then brings terrorism. Except the coups every 20 years, Turkey should be glad to have a democracy. As a Turkish columnist he asked the question, “Can we make our democracy, a liberal democracy in which we elect the ruler but the elected will in turn be very respectful to civil liberties?” He added that this issue is an uphill battle for our democracy trend.

Furthermore, he believes that Tunisia, Egypt, Syria were not that lucky and he added that ultimately it is not going to be like this forever. Mustafa Akyol explained that things are beginning to change with the new age and that people are organized and affairs get triggered quicker because of social media websites like Twitter and Facebook. Why was Saudi Arabia not affected by the Arab spring? Well if one is in Saudi Arabia, one doesn’t have much to complain about “economically”, said Mustafa Akyol.

According to Mustafa Akyol, one successful country is Tunisia. Ultimately, the dictator left the country and evaluation took place without arm struggles. When Tunisia did this, Egyptians thought that perhaps they could follow their lead. Egyptians made free and fair election for first time in their history; however, it only lasted one year. In the case of Libya it is much more complicated. Kaddafi tried to use heavy weapons on the protestors in Libya. It turned into a civil war. After a while, more people died but Kaddafi was lynched by the protests. Unfortunately, Syrian regime didn’t give up and fought against its citizens and now more than 100,000 people died, two million refugees (600,000 of them in Turkey). Today, Syria is still in that horrible situation. The biggest issue that needs a solution in Syria is the sections, Sunni and Shia.

Every country is a case in itself but The Arab Spring doesn’t seem very bright in this stage. Only in Tunisia is going on well and democratically.

The program was concluded with a Q&A session.