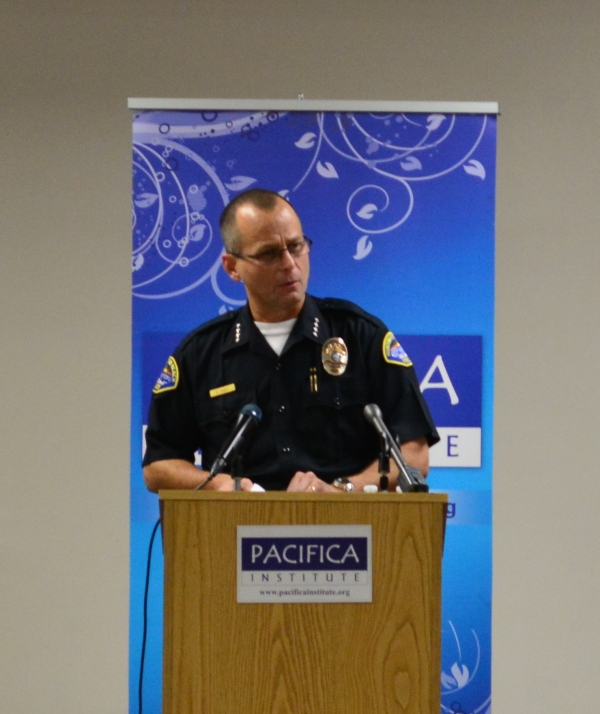 Chief Handy started his talk by thanking the participants and pointing out the importance of this gathering and interaction in order to learn from each other.

One of the most important points that chief Handy empathized during his speech was the fact that America is founded on freedom, freedom of speech, press, religion and many more rights in the constitution. On the other hand chief Handy also pointed out that “Not long ago we had civil rights issues and still we have issues and there is still a lot to learn.”

He continued, “When I started to work for police department, there were few college degree officers. But since than it completely changed. Many of our staff now has at least bachelor degree or a master degree. Training and the way of teaching of officers also changed. When I was in the academy there were twelve weeks of training. But now 6 months in the police academy and after that 6 months with field training officer with a structured program.”
” We hire better police officers and have access to better equipment in order to better serve to the community”, stated chief Handy.

Chief Handy gave some statistics on the HB Police Department’s service. “We arrest 5000 people a year and use force about 200 times a year. When you think of these numbers for a year in HB it is fairly significant. There is an average of 1 shooting a year and one of our police officers may have to use their own gun to defend himself or somebody else resulting in an average of 1 death a year.

“We train our officers every year 40 hours a week to teach how to use force and make them practice over and over again. We teach them techniques,” noted chief Handy as he gave information on the training of the police officers.
As Chief Handy wrapped up his speech he concluded with these words, “We can’t expect a police officer without mistakes. We are human beings. We can teach and train our officer in the perfect way but we will make mistakes. We have to learn from those mistakes to go on. Sometimes But these mistakes can sometimes bring about very bad results. And that is one of our struggles.”

The program came to an end with a Q&A session where Chief Handy graciously answered the community members’ questions. Pacifica Institute would like to thank Chief Handy for reaching out to the community and sharing this important and informative talk.