Combating the Cancer of Extremism: Causes and Remedies 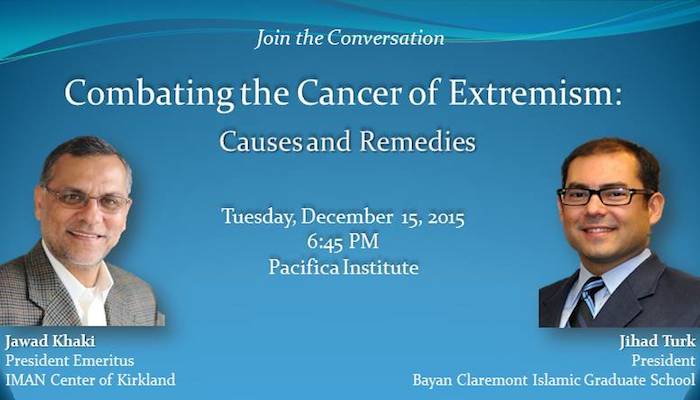 Mohamed Jawad Khaki is Co-Founder and CEO of Uhuru Software, Inc. where he is working on integrated application development platforms, management tools and services to enable rapid development and deployment of solutions in private or public clouds by enterprises and service providers.

Jawad was was recognized nationally with the sixth annual Walter Cronkite Faith and Freedom Award by the Interfaith Alliance Foundation in May 2003.  He was appointed honorary professor by Beijing University of Post and Telecommunications in October 2003. In November 2012 he was conferred with an Honory Doctorate of Technology from Universty of East London.

Jawad envisions an America that, with its rich tapestry of pluralism, incorporating all ethnicities and religions, inspires not only those just within its borders but all those who inhabit our planet.

Jihad Turk has been instrumental in the establishment of Bayan Claremont, a graduate school designed to educate Muslim scholars and religious leaders. He previously served as the Director of Religious Affairs at the Islamic Center of Southern California, the oldest and largest mosque in the Los Angeles area.

His field of research focuses on Islamic Law with an emphasis on usul al-fiqh, or jurisprudence as well as theology. His current interests also include identity formation in the American-Muslim community, interfaith relations, Islamic reform movements, and community leadership and development with a focus on youth.

One Seattle-area imam’s attempt to call out extremism continues Tuesday, Dec. 15, in a public dialogue titled “Combating the Cancer of Extremism.” He says, “I have to categorically reject indiscriminate slogans of death.”