Book Talk: “Why do they hate us? Making Peace with the Muslim world.” by Steve Slocum 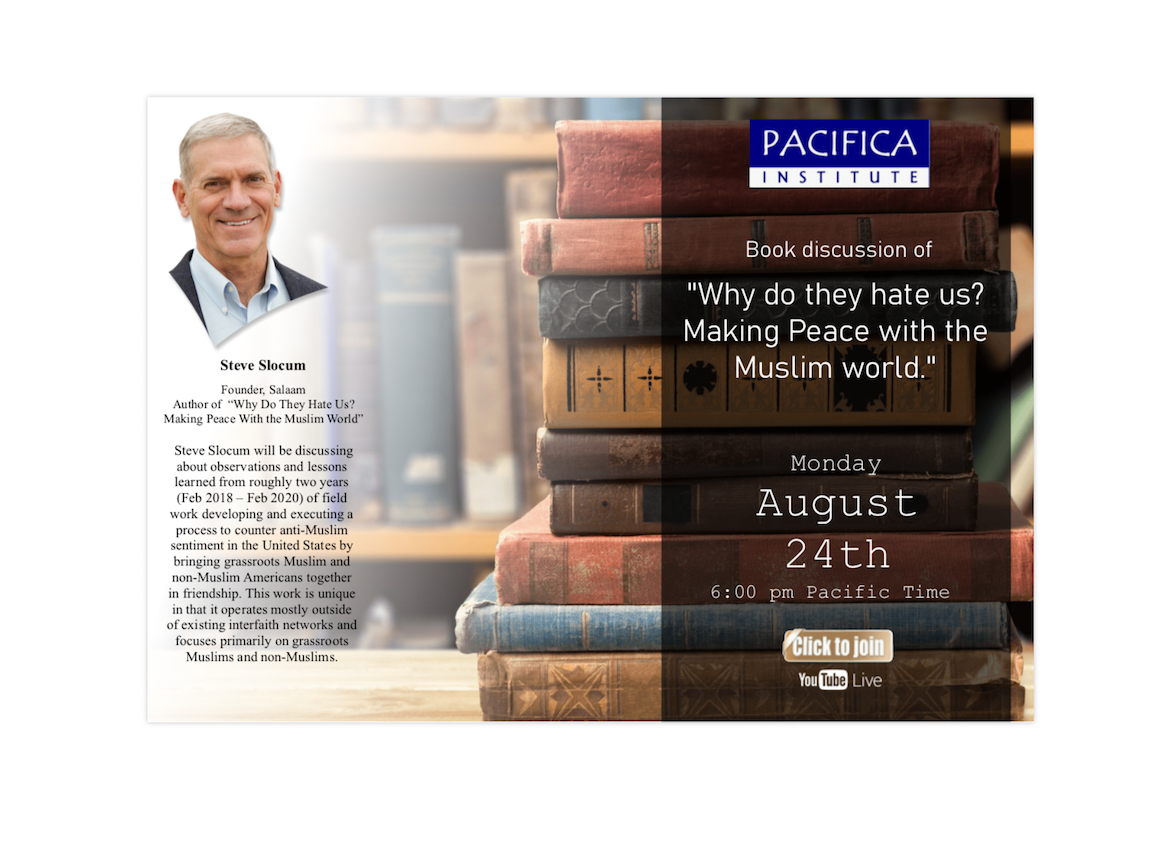 Book Talk: “Why Do They Hate Us? Making Peace With the Muslim World”

Date & Time: AUG 24, Monday, at 18:00 PST
Author of “Why Do They Hate Us? Making Peace With the Muslim World” . Steve Slocum will be discussing about observations and lessons learned from roughly two years (Feb 2018 – Feb 2020) of field work developing and executing a process to counter anti-Muslim sentiment in the United States by bringing grassroots Muslim and non-Muslim Americans together in friendship. This work is unique in that it operates mostly outside of existing interfaith networks and focuses primarily on grassroots Muslims and non-Muslims.

Here are several excerpts from his talk.

* Is an interesting question in the sense that it is all based on pronouns.  “Why do they hate us?”. When I speak to Muslims, they usually think that I mean why do non-Muslims hate Muslims. When I speak to non-Muslims they think the exact opposite but it is actually a direct quote from George W Bush ‘s Speech right after 9/11. He answered it by saying “They hate our freedoms” and so on, but none of that was true. It was used as the motivation behind invading other countries and creating chaos.

*In the 90s, I ended up in the Turkic world as a Christian Missionary in Kazakhistan. That was sort of the beginning of my journey. I was immersed in a wonderful Turkic-Muslim culture. Even though I was there for the intent of converting people to my own religion, people treated me with hospitality and kindness but not only to me also to my children. We were invited to birthday parties, weddings and everything. It planted the seeds in me to change, to unwind my strongly held Christian beliefs and make space. Maybe they didn’t need my belief.

After 9/11, I had many questions. I asked myself “Why did these Muslim guys do this?” because it sure didn’t add up to my experience with Muslim people in Kazakhstan. So that was the beginning.

* We help communities counter islamophobia in 3 steps which are: We first do awareness events like, local mosque visits. In these visits, people hear the prayers and sometimes even pray together. Second step is small group discussions which we do peace meals and discussions with 10 to 10 groups. These give people a chance to ask deeper questions. Our final step is cultural awareness travels. It is one thing for an American to host but it’s something else to be that stranger in a foreign country.

* Trust is not something that is given instantly it takes time. There’s no shortcuts, it’s just building and then honoring that trust.

Interfaith Prayer for Rain, Against the Wildfires and Service for Humanity