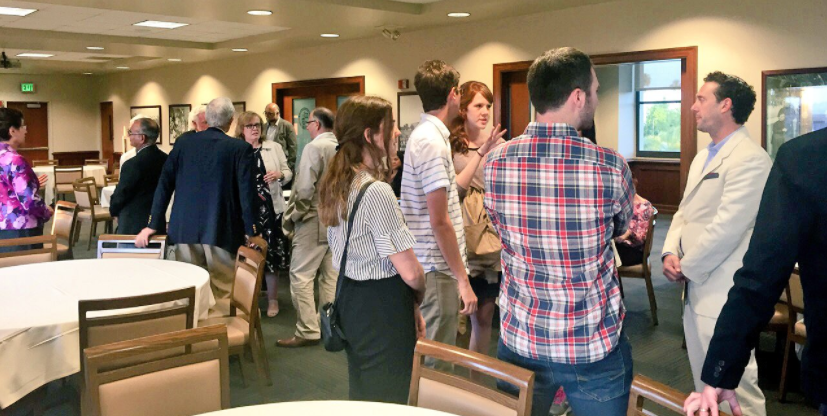 The Loyola Marymount University Ramadan Interfaith Iftar Dinner took place in the Malone Student Center and was co-sponsored by Loyola Marymount University, the LMU Muslim Student Association, and the Pacifica Instiute. Guests arrived for an iftar dinner and a panel discussion about fasting from the perspective of the three Abrahamic faiths. Before the meal, evening prayer was performed preluded by the adhan, call to prayer. Following the prayer, Dr. Amir Hussein introduced the speakers of the panel about fasting.  Dr. Lane Bove, Vice President of LMU Student Affairs, was presented with a decorative plate as a gift to commemorate the iftar.

The panel began with LMU Campus Rabbi Zachary Zysman who spoke about about fasting in Judaism and said there is no fasting during Shabbat and the month of April, Nisan. Those who are sick or elderly and children are not required to fast.  Yom Kippur is the Jewish day of fasting which is performed communally. There is also individual fasting to ask for God’s mercy or to commemorate a loved one’s death. Rabbi Zachary stressed that fasting is about God because our bodies belong to God.

Professor John Barton from Pepperdine University spoke about fasting in the Christian tradition.  He said “I am deeply grateful to be part of this dinner and discussion.  I locate myself as part of Protestant Evangelical world. I consider myself an agent for standing up for others. While there is no command to fast in the New Testament, Jesus was an avid faster. He assumed his followers would also fast. Early Christian communities would fast on Wednesdays or Fridays or they would fast before baptism and other special occasions.  It was not until the 5th century that a 40 day fast became central beginning with Ash Wednesday and leading up to Easter. With the Protestant Reformation, fasting in Christian tradition began to decline.  In contrast, fasting in the Orthodox Christian tradition has remained consistent.”

Kienan Taweil, Co-President of the LMU Muslim Student Association, spoke about fasting in the Islamic tradition and the significance of the holy month of Ramadan. Kienan read a verse from the Holy Qur’an about fasting from Surah Al Baqarah, verses 183-185: “O you who believe! Fasting is prescribed for you as it was prescribed for those before you, that haply you may be reverent, for days numbered. But if any one of you be ill or on a journey, it is a number of other days, and for those who can bear it, the ransom of feeding an indigent person. Whosoever volunteers good, that is better for him, and to fast is better for you, if you but knew. The month of Ramadan is that wherein the Quran was sent down as a guidance to mankind, as clear proofs of guidance, and as the Criterion. Let him among you who is present fast during that month. And whosoever is ill or on a journey, it is a number of other days, God desires ease for you, and He does not desire hardship for you. It is so that you may complete the number and magnify God for having guided you, that haply you may give thanks.”  Muslims believe that the Holy Qur’an began to be revealed to the Prophet Muhammad (Peace Be Upon Him) during the month of Ramadan.  When Muslims fast, they abstain from food and drink during the day and devote themselves to increased acts of worship. Like in Judaism, those who are sick and elderly are exempt from fasting.  Ultimately, fasting in Islam is done for the sole pleasure of God.